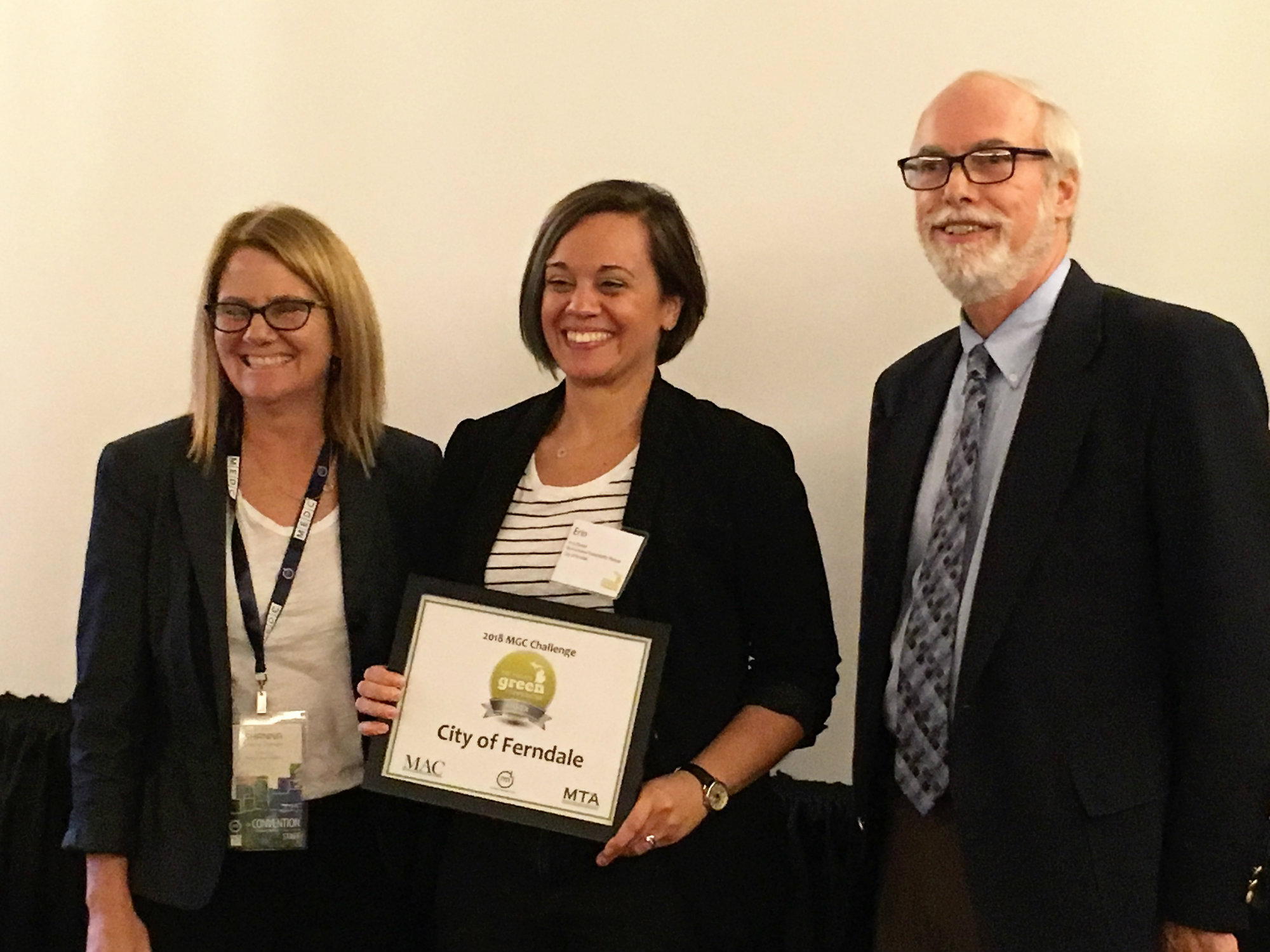 The City of Ferndale is one of thirty Michigan communities to be honored in the statewide Michigan Green Communities Challenge for taking on a wide range of sustainability projects—everything from preparing for autonomous vehicles to using electric lawn mowers.

The City received a Silver Certification for hiring an environmental sustainability planner and working toward implementing sustainability efforts as established in the master land use plan, including urban tree canopy revitalization, streetlight retrofitting, and energy optimization.

The communities were recognized in Grand Rapids on Sept. 27 at the annual Michigan Green Communities Awards Lunch and Workshop. The awards acknowledge clean energy and environmental leadership. The recognition is awarded by the Michigan Green Communities Network (MGC), which aims to connect community leaders through training, education, and communications. The MGC is a partnership of the Michigan Municipal League, Michigan Association of Counties, and Michigan Townships Association.

The original Challenge launched in 2009 and emphasized energy efficiency projects. In 2016, MGC network members, with support from the Charles Stewart Mott Foundation, revised and relaunched the MGC Challenge. Program benefits include creating a roadmap for sustainability initiatives; establishing benchmarks for a community’s progress toward sustainability initiatives; and the motivation of comparing and competing with other Michigan communities. The Challenge competition occurs annually but is available year-round as a tool for communities to benchmark sustainability.

In 2018, communities took over 450 actions toward becoming more sustainable and reported over 290 metrics to track their progress. From 2016 to 2018, the Challenge has seen more than a 60-percent increase in actions reported by communities, demonstrating a growing commitment to sustainability in the state. Actions reported range from 100-percent renewable energy resolutions to non-motorized transportation improvements, said Shanna Draheim, manager of the MCG Challenge Program.

“This impressive number of sustainability actions taken in our state shows that more and more communities understand the value and importance of green initiatives as it relates to the health and economic well-being of their community,” Draheim said. “This Green Challenge program gives them the tools and network to help advance those environmentally conscious goals.”

As part of the Michigan Green Communities Challenge, participating local governments were awarded Gold, Silver, and Bronze certifications. In this year’s Challenge communities involved in the program were eligible to win prizes sponsored by the Michigan Municipal League Foundation, EcoWorks, and Michigan Energy Options.

The City of Traverse City received this year’s prize for most improved community. As a first-time participant in 2017, Traverse City used the Challenge to start sustainability conversations in the community and made significant process in 2018.

“Traverse City is striving to move our policy and practices in concert to protecting the natural resources that surround us in northern Michigan,” said Marty Colburn, city manager for Traverse City. “It is a learning process that includes taking action and driving the discussion and implementation. It's an honor, and we appreciate being recognized for our efforts as it continues and moves the dialogue forward. These efforts will pay forward to a healthier community and preserve the environment for generations to come.”

Here is a breakdown of the recipients by level:

City of Ann Arbor: Passed a resolution committing the city to 100-percent renewable energy for municipal use by 2035.

City of Dearborn: In the process of adopting a multi-modal transportation plan that includes pedestrian, biking, public transit, and autonomous vehicle strategies.

City of East Lansing: Adopted the Climate Sustainability Plan from which the city implements their action planning, goals, and objectives.

City of Novi: The City’s Integrated Solutions Team created a combined parks maintenance facility and trailhead, set to be completed in November 2018, that will include 28 solar panels providing an estimated 55 percent of the facility energy requirements during peak usage.

Pittsfield Charter Township: Adopted revisions to the zoning ordinance to reflect an emphasis on natural resources protection and established the Sustainability Committee to hard code a focus on environmental stewardship into the DNA of Pittsfield Township's work processes and products.

City of Battle Creek: Installed a wood chip boiler heater at its city hall that is expected to cover up to 90 percent of the heating for the city hall and the police department.

City of Traverse City: Acquired electric mowers that are requiring minimal maintenance and recently approved the purchase of significant equipment upgrades for their composting facility.

Clinton Township: Making green infrastructure investments to improve water quality in the Clinton River and to benefit the health of residents.

City of Big Rapids: Conducted an energy audit and analysis on its city hall and the Big Rapids Community Library.

City of Flint: Partnering with local community organizations to integrate green infrastructure into its parks system and integrating community-led projects that reduce the long-term maintenance of city parks.

City of Grand Blanc: Inventories all vehicles and equipment options for energy savings.

City of River Rouge: Converted all utility-owned streetlights to LEDs.

City of West Branch: Conducted a lighting audit of all city properties and street lights.

Village of Quincy: Established an internal sustainability team for the village.

Charter Township of West Bloomfield: LEED Certification design is required for buildings more than three stories in height located within the Township Center Overlay District (TCD). Currently two buildings within the TCD are under construction.

Michigan Municipal League is dedicated to making Michigan’s communities better by thoughtfully innovating programs, energetically connecting ideas and people, actively serving members with resources and services, and passionately inspiring positive change for Michigan’s greatest centers of potential: its communities. The League advocates on behalf of its member communities in Lansing, Washington, D.C., and the courts; provides educational opportunities for elected and appointed municipal officials; and assists municipal leaders in administering services to their communities through League programs and services. Learn more at mml.org.