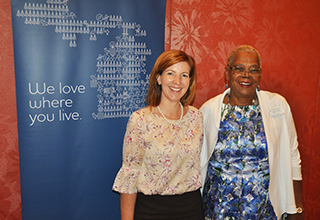 Ferndale Councilmember Melanie Piana has been selected as the 2018-19 president of the Michigan Municipal League Board of Trustees.

Piana was named board president by the 18-member board during the Michigan Municipal League’s 2018 Convention that took place last week in Grand Rapids. The board also selected Saginaw City Councilmember Brenda F. Moore as vice president.

“I’m honored to be selected to help lead our Board and this outstanding organization for the next year,” Piana said.

Piana has served on the League board since 2015, including the past year as League vice president. She is a three-term City of Ferndale councilmember serving from 2010. She currently is the Deputy Director at Jefferson East, Inc. (JEI), a multi-service nonprofit that creates inclusive neighborhoods for Detroit’s east Jefferson corridor and its neighborhoods.

As League president, she plans to help sustain the League’s ongoing SaveMICity initiative that aims to reform the state’s broken system for funding municipalities—she published a widely circulated editorial last week calling for state-level change to the systemic problem of local municipalities losing financing due to excessive state revenue sharing. She'll also continue the League’s 16/50 effort to have more women involved in local government and plans to drive the League board’s strategic planning work that started over the summer and includes focus on the issue of inclusivity.

“The Michigan Municipal League has long been one of the stronger municipal leagues in the nation,” Piana said. “The Board is now working on our vision from now through 2028 so we can continue to be the best municipal league while also continuing to serve the communities with adaptive changing environments. How can we as an organization adapt to these rapidly changing environments? That’s a question I hope we can form a plan around.”

Piana has been involved in all aspects of local government serving the Planning Commission, Zoning Board of Appeals, Environmental Sustainability Commission, Southeast Michigan Council of Government city liaison and Executive Committee and won volunteer of the year award in 2007 from the Downtown Development Authority. In addition to serving on the League board, Piana has served three years on the Michigan Municipal League Foundation board of directors and served on the League’s Transportation and Infrastructure Committee. She has completed the Elected Officials Academy Level I Education and Level II Leaderships awards.

In her professional positions, Piana has assisted over 30 communities across Metro Detroit and the state through her nonprofit advocacy leadership roles through the Michigan Suburbs Alliance, and in Detroit supporting the Downtown Detroit Partnership, and now with Jefferson East, Inc. She has a master’s degree in Urban Planning, bachelor of arts in Communications and German, and a certificate for executive leadership training from Harvard Kennedy School for State and Local Government.

In related action, the board selected Saginaw City Councilmember Brenda F. Moore as the League’s 2018-19 vice president. Moore is now in line to become League president in 2019-20.

About the League: Michigan Municipal League is dedicated to making Michigan’s communities better by thoughtfully innovating programs, energetically connecting ideas and people, actively serving members with resources and services, and passionately inspiring positive change for Michigan’s greatest centers of potential: its communities. The League advocates on behalf of its member communities in Lansing, Washington, D.C., and the courts; provides educational opportunities for elected and appointed municipal officials; and assists municipal leaders in administering services to their communities through League programs and services. Learn more at mml.org.